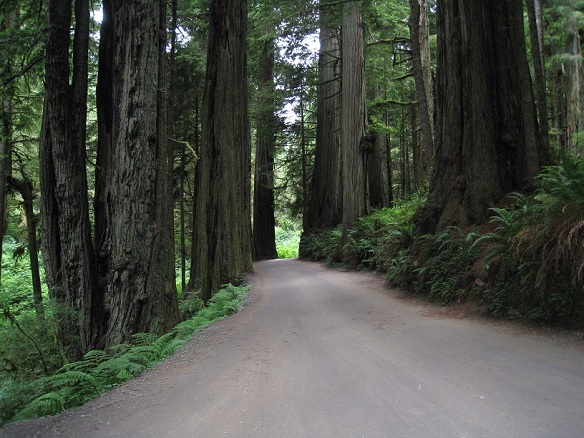 Having just traveled on the Redwood Highway (aka US 101) this past weekend, I realized that a post on Redwood National Park was long overdue. I avoided writing about this park immediately after my July road trip because it was such an odd experience for me. Walking through the trees is itself intensely spiritual, but, for me, driving through the park became almost Proustian as my childhood flashed before me and I realized with a shock that I had been there before.

“A fool sees not the same tree that a wise man sees.”
—William Blake

It is truly a wondrous place.

Redwood National Park is actually made up of three state parks with additional land added on, totaling over 130,000 acres, but in no real pattern. So, one weaves in and out of the park as one drives along. It is probably for this reason that the National Park Service does not charge its usual vehicle fee. At the Kuchel Visitor Center near Orick, the ranger told me to avoid Lady Bird Johnson Grove (generally the most crowded spot since every guidebook mentions it) and said I would see just as many old growth trees by taking my planned route on the Newton B. Drury Scenic Parkway through Prairie Creek Redwoods State Park and the Howland Hill Road in the Jedediah Smith Redwoods State Park.

The Newton B. Drury Scenic Parkway is a brief detour off of Hwy 101 that takes you through Elk Prairie Meadow and right by the aptly named “Big Tree Wayside” stop. Although one sees them elsewhere, this is probably your best chance of spotting elk.

Elk were not the only wildlife I saw. In an incredible, but ultimately sad, turn of events, a gray whale and her baby had swum up the Klamath River a few weeks before my arrival and had taken up residency under the Klamath Bridge, where hoards of tourists would flock from one side to the other as the whale swam beneath it. The baby was successfully driven out to sea, but the mother eventually beached herself and died weeks later.

Howland Hill Road, at the northern-most end of the park just south of the Oregon border, is a bit harder to find but is absolutely worth the trouble. If you follow the entire road, past Stout Grove and out to Route 199, you can loop around and rejoin US 101 without doubling back. The drive is an incredible experience with trees immediately on either side looming over the (often) one-lane road.

If you want to get a taste of the redwoods and can’t make it all the way up north, you can drive the Avenue of the Giants, a 30-mile stretch of road that parallels Highway 101 as it winds its way through Humboldt Redwoods State Park. The southern entrance of this route is at Phillipsville and the northern at Pepperwood, just 200 miles or so north of San Francisco. If you want to walk among the trees for a bit, I recommend the Loop Trail in the Founders Grove. Even though Return of the Jedi was actually filmed on private land just north of the National Park, this trail was where I most felt like I was on that movie set.

This site uses Akismet to reduce spam. Learn how your comment data is processed.

Wherein I document my quest to visit all U.S. national parks and other travel adventures

"I haven't been everywhere, but it's on my list."—Susan Sontag

Unless otherwise noted, all photos posted on this site have been taken by your humble blogger.
For my writing on literature, the performing arts, and other cultural ramblings, check out Sly Wit.